I recently attended an illustrator intensive workshop put on by the Inland Northwest Region of SCBWI. The presenter was Robert Lence. He’s worked in the story department for Pixar, Dreamworks, and Disney and has been an instructor at California Institute of the Arts.

He knows a thing or two about telling stories.

A few concepts emphasized during the course of the intensive were: have a great foundational idea/concept, play to your strengths, have the endurance to throw it out if it’s bad and re-create, and finally just begin.

At the end of the intensive, we were to tell an entire story with one illustration (with no caption) in one hour. No pressure! I had to leave to pick up my kids from school, so I had about 15 minutes. To save time, I went with a story that everyone already knows. (I told how the Tortoise really beat the Hare).

I was able to make it back to hear the critique and the results of the juried assignment. The solutions from the attendees were incredible. Robert’s feedback was excellent and everyone’s storytelling skills were sharpened. I didn’t think my speed drawing would win any awards, but I actually did get a prize for it. Below, you can see me with Robert and my ‘swag.’

And without intending it, my story panel reinforced one of the most important concepts a story-teller can grasp: START. As the wise Gaffer from Tolkien’s Lord of the Rings said, “It’s the job that’s never started as takes longest to finish.” 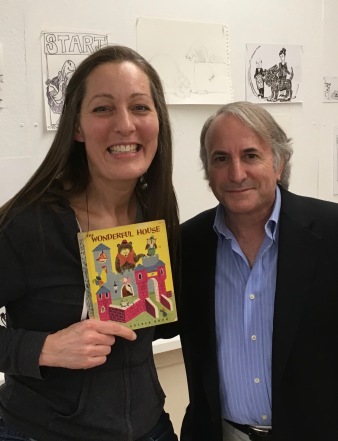 2 thoughts on “A thing or two about telling stories”